The Big Island’s “Green Sand Beach” is one of only four green sand beaches in the world.

The beach is officially called “Papakolea Beach”. It looks like a mouthful. But like most Hawaiian words, you’ve just got to sound it out. It sounds exactly like it’s spelled: “Papa Koe Lay Ah”. Easy. 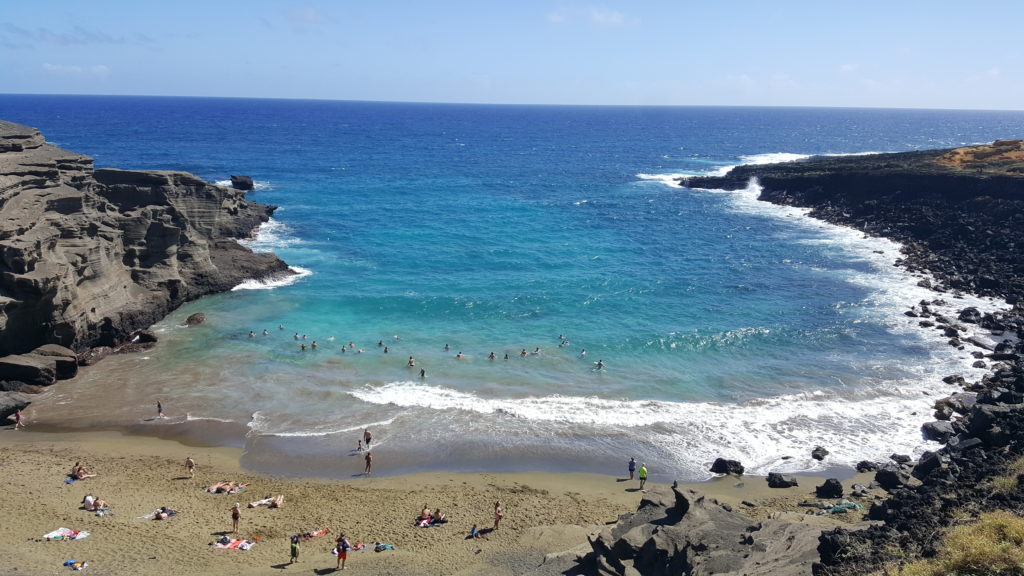 Papakolea Beach is located on the very southern tip of the Big Island. In fact, it’s nearly the southernmost point in all of the United States (the official “most southernmost” title belongs to nearby South Point, which you’ll drive past as you walk in). 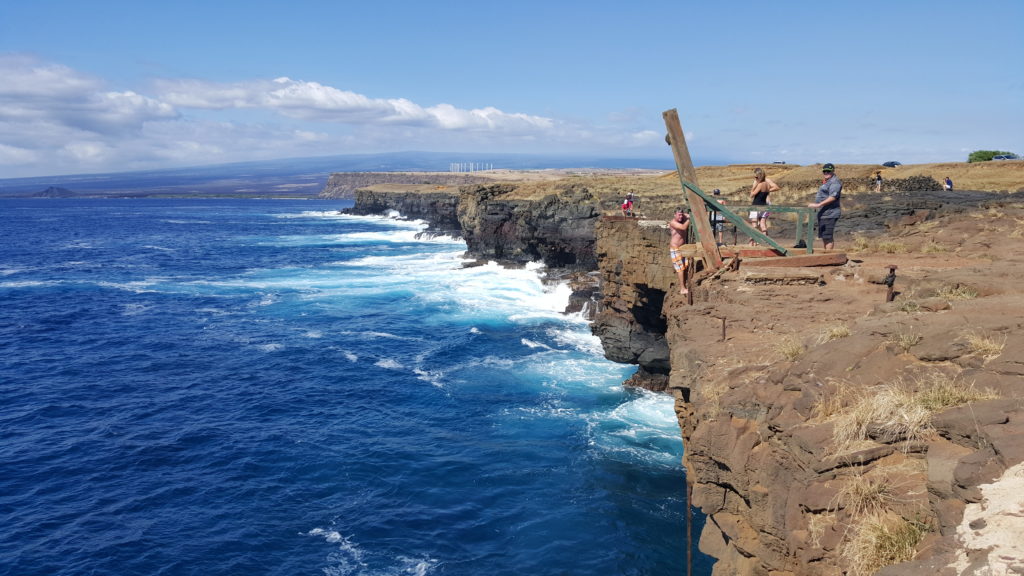 If you have a GPS, then you should be able to type “Papakolea Beach” into your GPS and go from there. Alternatively, “S Point Rd” or “South Point Road” should be in there.

If you don’t have a GPS, then the area is clearly marked regardless. Drive down Mamalahoa Hwy (Highway 11) past Ocean View and Hawaii Ocean View Estates (aka HOVE). Then, wait for signs pointing you towards South Point. You’ll turn right off the highway) coming from Kona) or left (coming from Hilo). 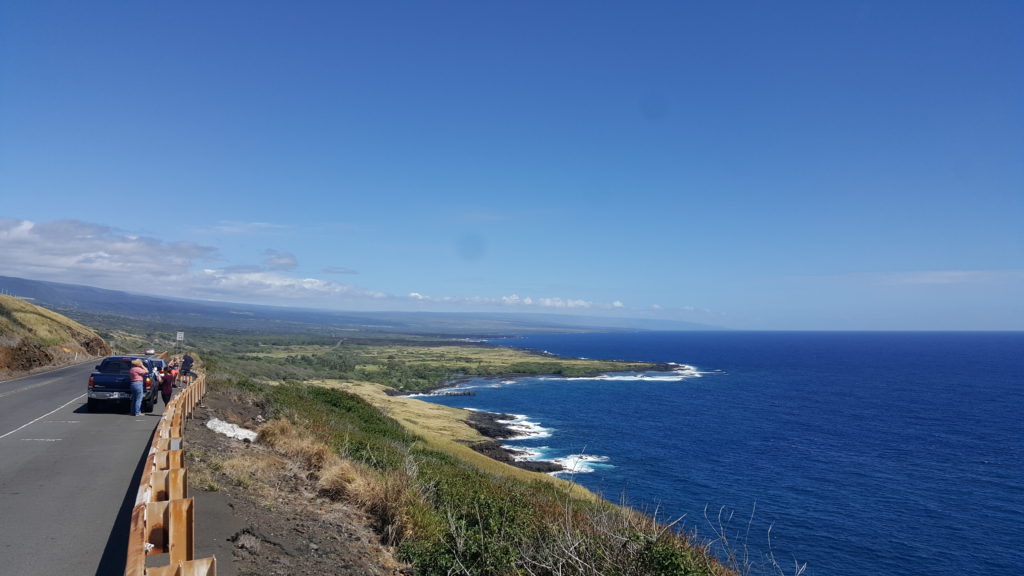 Follow S Point Road for about 15 minutes. It’s a narrow round with some blind corners and hills, so be careful of oncoming traffic. The road isn’t wide enough for two vehicles in many parts, but there are ample shoulders that make it an easy drive.

Eventually, you’ll pass various farm buildings and two massive antennas. You’re almost there. Up ahead, the road will turn off right towards South Point (the southernmost point in Hawaii and all of America). Continue on the road until you reach the parking lot for Green Sand Beach.

From the parking lot, you have two options. You can pay to take a “shuttle”. Or, you can hike it yourself.

At the parking lot, local Hawaiians will offer to drive you down to Green Sand Beach for $20 USD per person, round trip.

They call this a “shuttle service”. 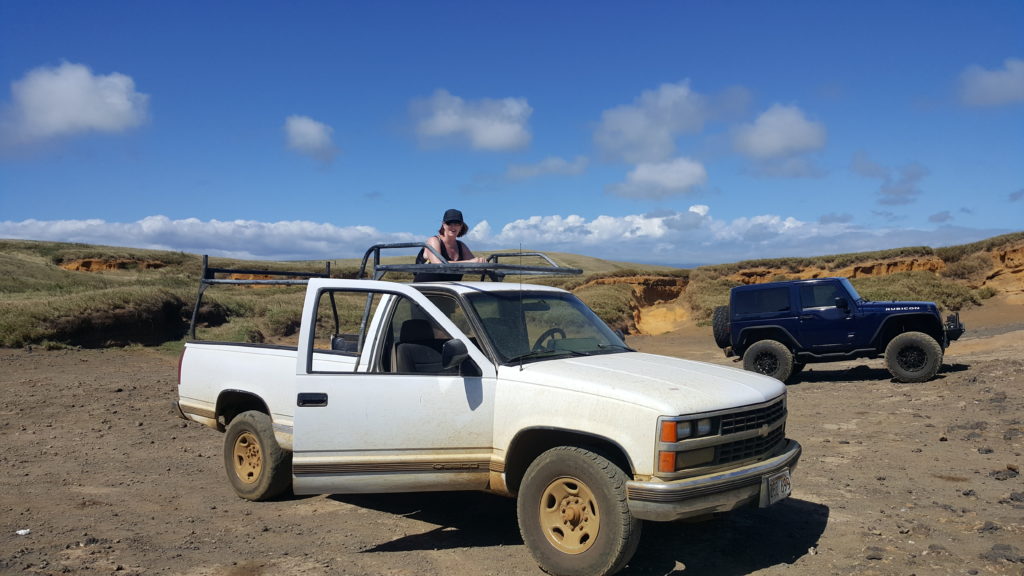 In reality, you’re standing in the back of a pickup truck holding onto a roll cage with 6 to 8 other tourists. The truck goes over sharp, bouncy lava and some truly steep, dangerous roads. You’ll need to hold on for dear life.

If you’re young, old, or not great at standing up, then you may be able to ride in the front of the truck. There are 2 or 3 seats available.

The ride takes about 20 minutes each way. It’s part of the experience. It’s seriously like a roller coaster at some spots.

Once you arrive at Green Sand Beach, your driver will ask how long you want to stay. You’ll need to decide on a time as a group. We stayed about an hour – but you might want to stay longer if you’ve packed a picnic or beers.

The drivers, by the way, weren’t exactly friendly when we visited – so don’t try to chat them up or make your shitty tourist jokes (like we did). One male driver was wearing a shirt with the words “Pussy – The Most Expensive Meal You’ll Ever Eat” written on it. So yeah, they really don’t give a shit beyond the $20 you’re paying. This isn’t a licensed tourist operation.

There’s nothing wrong with hiking to Green Sand Beach. It just takes some time. The “hike” (really, a walk) takes about 45 minutes to 1 hour. 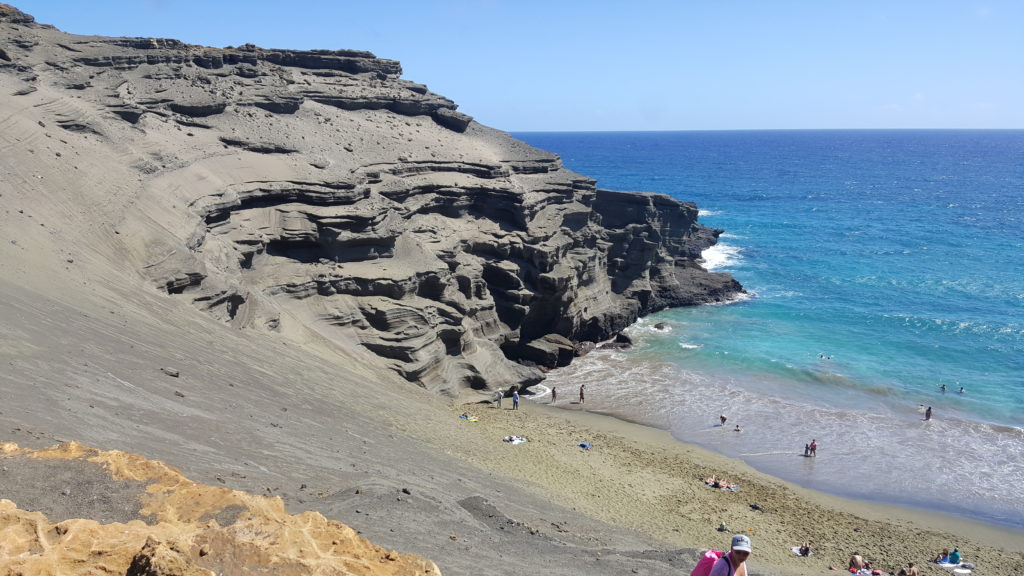 There is no shade on the walk. It’s across harsh lava rock in many places. It isn’t overly scenic. You’ll want to bring lots of water and sunblock if you decide on this option.

Many people hike to Green Sand Beach, then decide to hitch a ride back.

There’s nothing wrong with this approach. You save money and get some exercise. You’ll pay $10 one way, per person to hitch a ride back. You’ll hop on a truck with a group that visited the beach together – so you might be squeezed in on the way back (we had 6 people in the back of the truck going there, 8 people on the way back; it was cozy).

What to See at Green Sand Beach

You can walk the length of the beach in about 60 seconds. 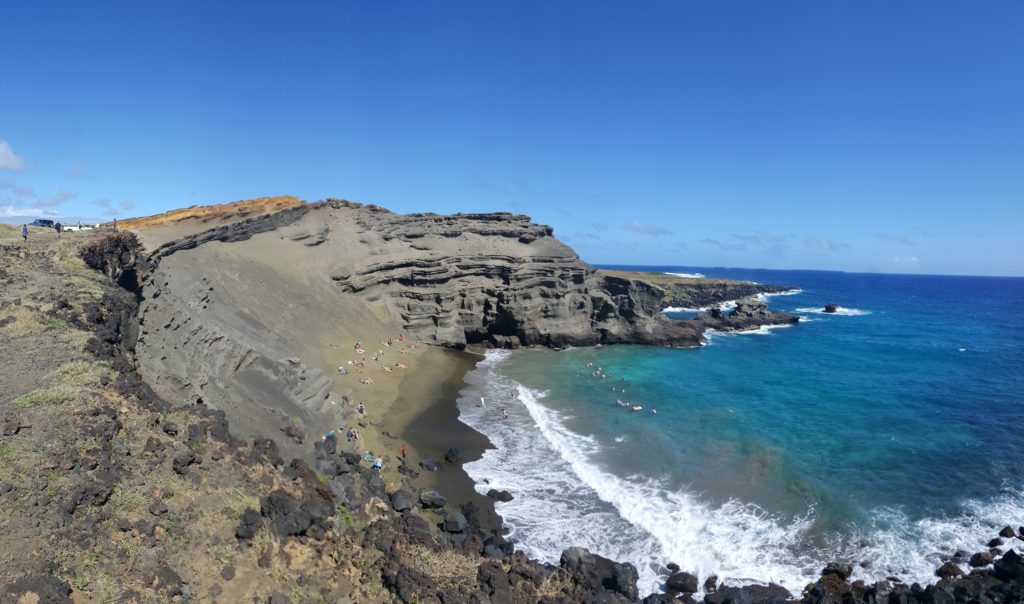 Sit down, relax, and admire the view. Or, go swimming. There are very few rocks on the bottom, making this a great boogie boarding/body boarding beach. However, be careful of the high surf: it’s a narrow bay, so the waves and tides can be strong.

We also saw people snorkeling at the beach, although I’m not sure how much there is to see.

If you don’t want to walk down to the beach, then you don’t have to. You can see the entire beach from the top. You can also walk along the cliff to get a nice view looking back at the beach.

Why Is It Green?

Papakōlea Beach is green for the same reason as all green sand beaches: there’s a mineral called “olivine” in the sand. 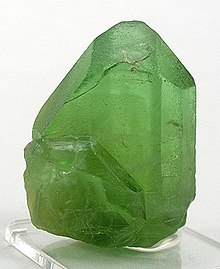 Olivine is a greenish glassy crystal. It washes up on the green sand beach in Hawaii because of the nearby cinder cone. The 49,000 year old cinder cone above the beach once spewed lava that was rich with olivine.

Typically, light volcanic sand is swept out to sea (which is why black sand beaches are relatively rare). 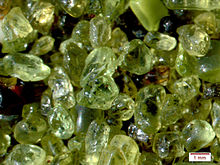 Olivine, however, is quite heavy. It accumulates on the beach. When you’re looking at the “green” in Hawaii’s green sand beach, you’re looking at green olivine crystals mixed in with black and normal (golden) sand.

The narrow shape of the bay also leads to greater olivine accumulation on Papakōlea Beach.

Where Does the Name Come From?

That name comes from a combination of two words Hawaiian: papa and kōlea:

Kōlea: “Pacific Golden Plover” (a bird that nests here in the winter)

The beach is also called “Plover Flats” because of that bird.

Some sources might call this area “Mahana Beach”. That’s because the cinder cone above the beach is called the Pu’u Mahana.

What Are the Other Green Sand Beaches?

Wikipedia, however, tells us that there are four official green sand beaches in the world. Two of those beaches are in the United States (Hawaii and Guam).

You might find websites that mention other green sand beaches in Hawaii. This is sort of true.

Booze Report: Can You Drink at Green Sand Beach?

Like most beaches in Hawaii, it’s easy to bring a cooler full of cold beer and ice to Green Sand Beach. 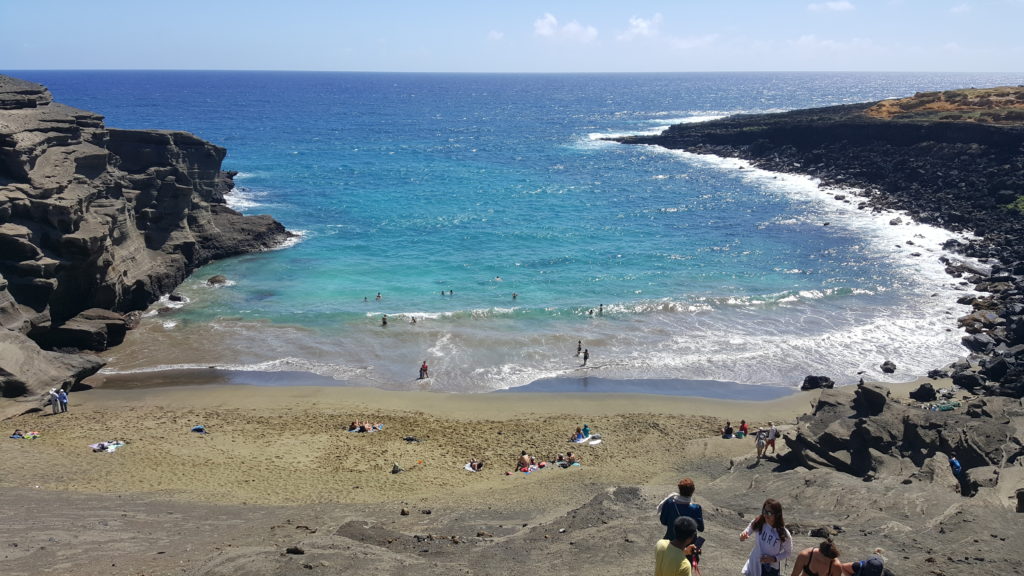 The Hawaiians that run the shuttle transport certainly aren’t operating a licensed tour bus service. Feel free to bring alcohol or even drugs to the beach for all they care: this land might as well be outside of the United States.

Just be aware that you need to drive back – so don’t get too fucked up. 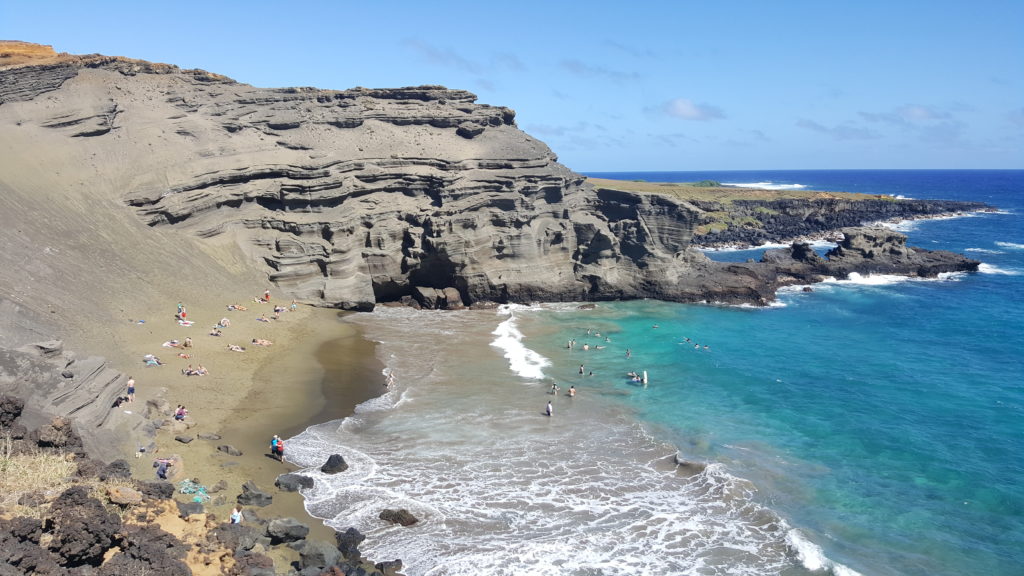 Ultimately, Papakōlea Beach is worth a visit for most active, healthy travelers. It’s a unique and beautiful place on an island that already has an overwhelming number of beautiful sights to see.

If you’re cruising past nearby South Point, or just doing a loop around the island, then Green Sand Beach is an easy 2 hour side trip (if you pay the $20 per person “shuttle” service).

However, don’t expect to see a bright green beach: even in direct sunlight, it’s more “greenish-brown” than “bright green”. It’s also not the most child-friendly or elderly-friendly place.

Work from Home Myths & Tips: What I’ve Learned After 10 Years

5 Best Things To Do in Trail, British Columbia